Earlier this year, my daugther’s 2nd grade elementary school class was given an assignment to write a short paragraph about something they own that was important to them and draw a picture to go along with it. While I pleaded for my daughter to choose Minecraft, she ultimately selected her favorite stuffed animal. A few other smarter, less spiteful kids did find inspiration in the world of video games, and their writings rivaled those of many popular video game web sites. In fact, each of them seems to have emulated a specific style of the current video game writing stable. See if you recognize your favorite site’s style below! 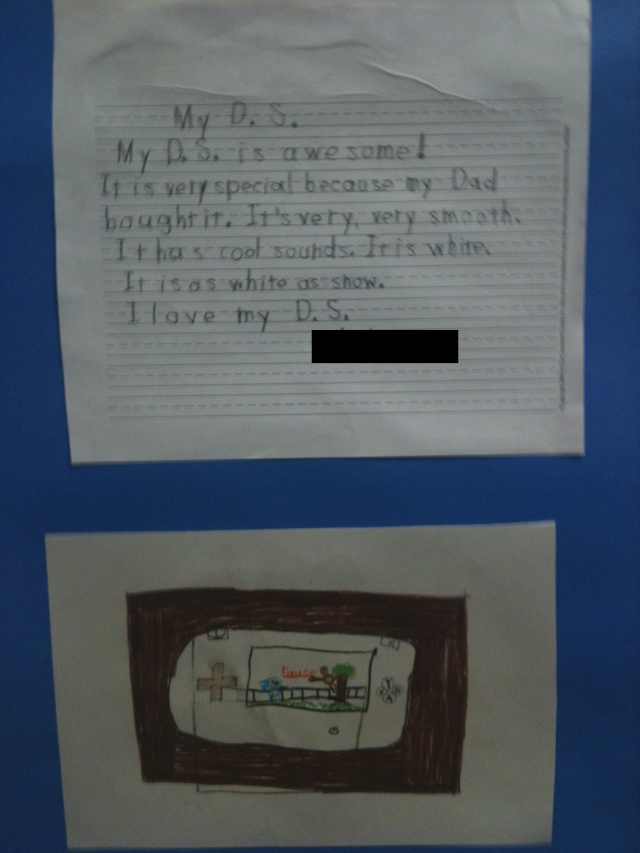 My D.S. is awesome! It is very special because my Dad bought it. It’s very very smooth. It has cool sounds. It is white. It is as white as snow. I love my D.S.

This writer’s emotional prose and unnecessary back story remind me of something I might read on insertcredit.com or in Kill Screen magazine. Sure, we all have DS, but this particular DS is special. During the divorce proceedings, this youngster’s father purchased it for them to help fill the hole where love once dwelt. Like most New Games Journalists, besides aspirations of painting us a word picture, the writer finds it necessary to pad his word count with overly elaborate verbiage. While an additional “very” is quite unnecessary, I do find it hard to dispute that the DS is, indeed, quite smooth. This leads us into the most poetical part of the piece, in which the DS is compared to the delicate majesty of new fallen snow. This writer doesn’t just like their DS, or believe it to be a well made piece of hardware, they are in love with their DS, and I love them for it.

Even before games were declared Art by the Supreme Court, the DS here was depicted in crayon as being inside a sturdy wooden frame, suitable for hanging and gazing at through your Wayfarer eyeglasses. Taking a closer look at the picture, you can see that the game drawn has been paused, but contains little other recognizable objects. My best guess, with its chubby, blue, spiky haired character and tree like obstacle would be a Sonic the Hedgehog Japanese import. It’s either that or a fat Mega Man with too much hair mousse. 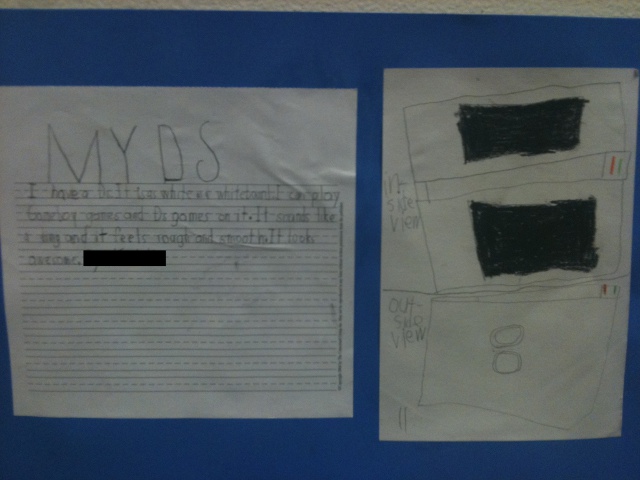 I have a Ds. It is as white as whiteboard. I can play Gameboy games and Ds games on it. It sounds like a ding and it feels rough and smooth. It looks awesome.

This entry feels like a solid marketing push that sticks to the facts. This kid went the extra mile in the drawing portion of the project, showing the DS in both the opened and closed positions; he is really selling it. His marketing savvy fell off a bit in the color description, remarking that it is, “as white as whiteboard,” but then he drops the ultimate marketing bomb: backwards compatibility. At this point, Nintendo would have been ready to offer him a job, but his last sentence contains a few curve balls. Though my photo is quite blurry, it still seems that he remarked that the system sounds like a “ding”, which leads me to believe this 7 year old marketer spent a little too much time on Urban Dictionary looking for buzzwords. Then, rather than targeting a specific demographic, he hoped to capture a wider audience and stated that the system feels both rough AND smooth. Way to gild the lily, second grader. 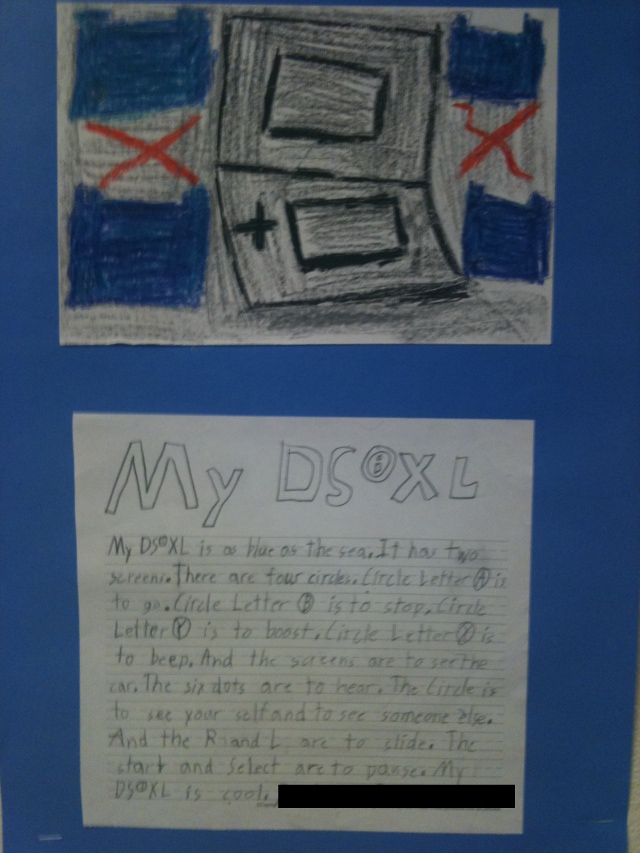 My DSiXL is as blue as the sea. It has two screens. There are four circles. Circle letter A is to go. Circle letter B is to stop. Circle letter Y is to boost. Circle letter X is to beep. And the screens are to see the car. The six dots are to hear. The Circle is to see yourself and to see someone else. And the R and L are to slide. The Start and Select are to pause. My DSiXL is cool.

If our first DS entry cops from your favorite New Games Journalist, this entry pulls straight from the Consumer Reports school of reporting. No single detail of the DS’s features are missed, except for the fact that it can play other games besides Mario Kart. Still, if you are in the market for a Mario Kart machine, this write-up has got you covered, even going so far as to describe the very nature of the speaker vents. Unfortunately, the picture portion of this entry doesn’t deliver the same level of detail. I’ve spent the past hour trying to figure out what the blue squares and orange Xs flanking the DS are. 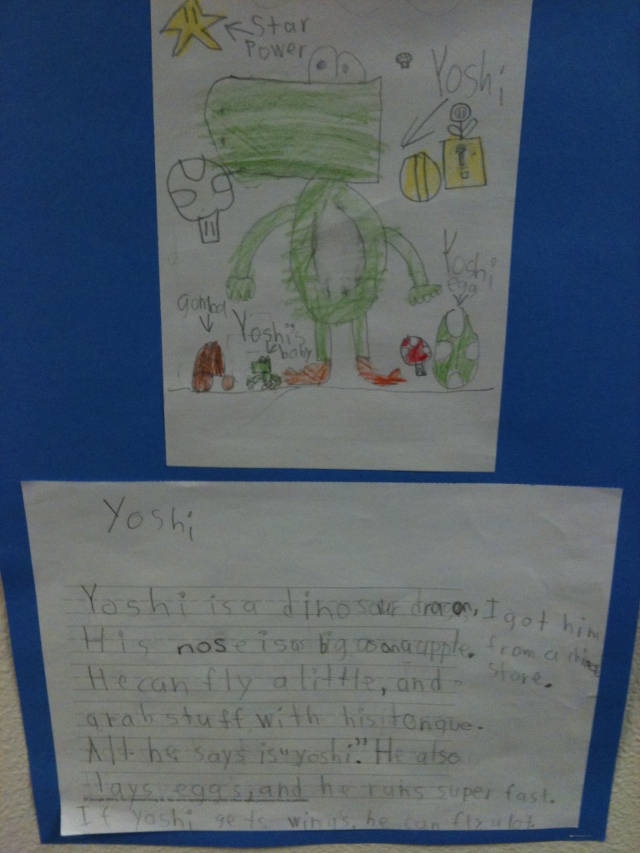 Yoshi is a dinosaur dragon. I got him from a Chinese store. His nose is as big as an apple. He can fly a little and grab stuff with his tongue. All he says is “yoshi.” He also lays eggs and he runs super fast. If Yoshi gets wings he can fly a lot.

Here we have an article only peripherally related to gaming, perfect for a blog or tumblr. Granted, it’s not a cake power-sculpted out of inedible fondant, or magic bead pixel art, but it gets the job done in a solid fan boy way. Is Yoshi a dinosaur, a dragon, or both? All we know for sure is that this kid picked him up in Chinatown after one of his father’s weekly massage appointments. As with most non-commercial writings, the art on this one is what brings in the page views. I doubt I could draw as good a depiction of Yoshi now, let alone when I was a portly 2nd grader. Despite his erect stature, Yoshi is instantly recognizable and a ton of little details have gone into this work. Coins, a fire flower, star power, Yoshi egg, “gomba”, and three types of mushrooms make an appearance, all labelled appropriately. The artist even went so far as to draw a baby Yoshi that is the spitting image of his father. I didn’t even put that much effort into the creation of my own child; mostly, I just laid on my back. 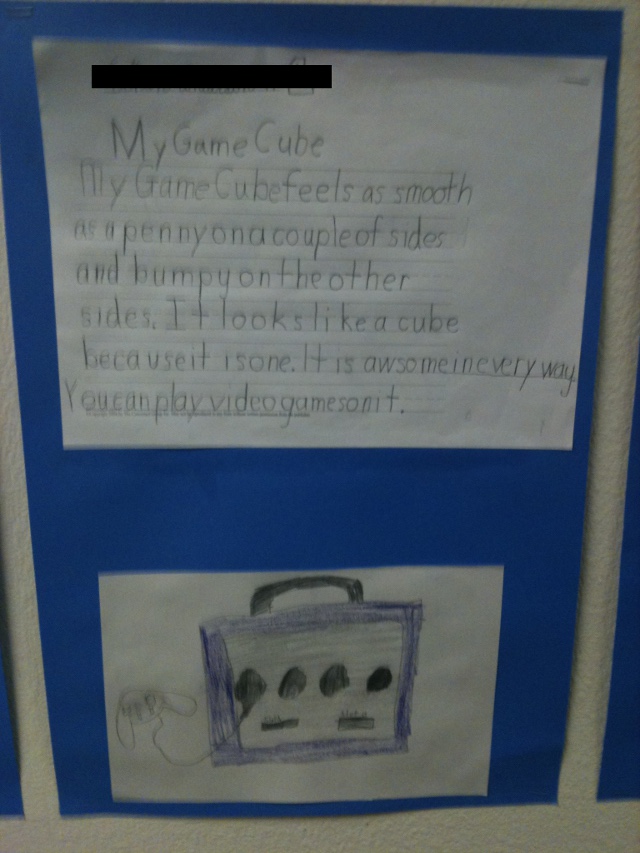 My GameCube feels as smooth as a penny on a couple of sides and bumpy on the other sides. It looks like a cube because it is one. It is awesome in every way. You can play videogames on it.

Nostalgia. It often paints a bright, sunny picture of the past to help us forget the times that we were struck by the lightning of reality. Like many before him, this writer cherishes the game system of his youth, believing it to be superior to any forthcoming offerings. “Awesome in every way,” with the exception of market share. The author, in an attempt to rebuff detractors of the GameCube’s legacy, reminds us (very specifically) that this is a system for playing video games, not watching movies, playing music, or other ancillary features touted by the competition back in the day. In the picture portion, the GameCube’s handle has strangely migrated from the back of the machine to the top, and it appears that he has connected a Microsoft Sidewider PC joypad into controller port 1. Ah, well. Such is the nature of memory. 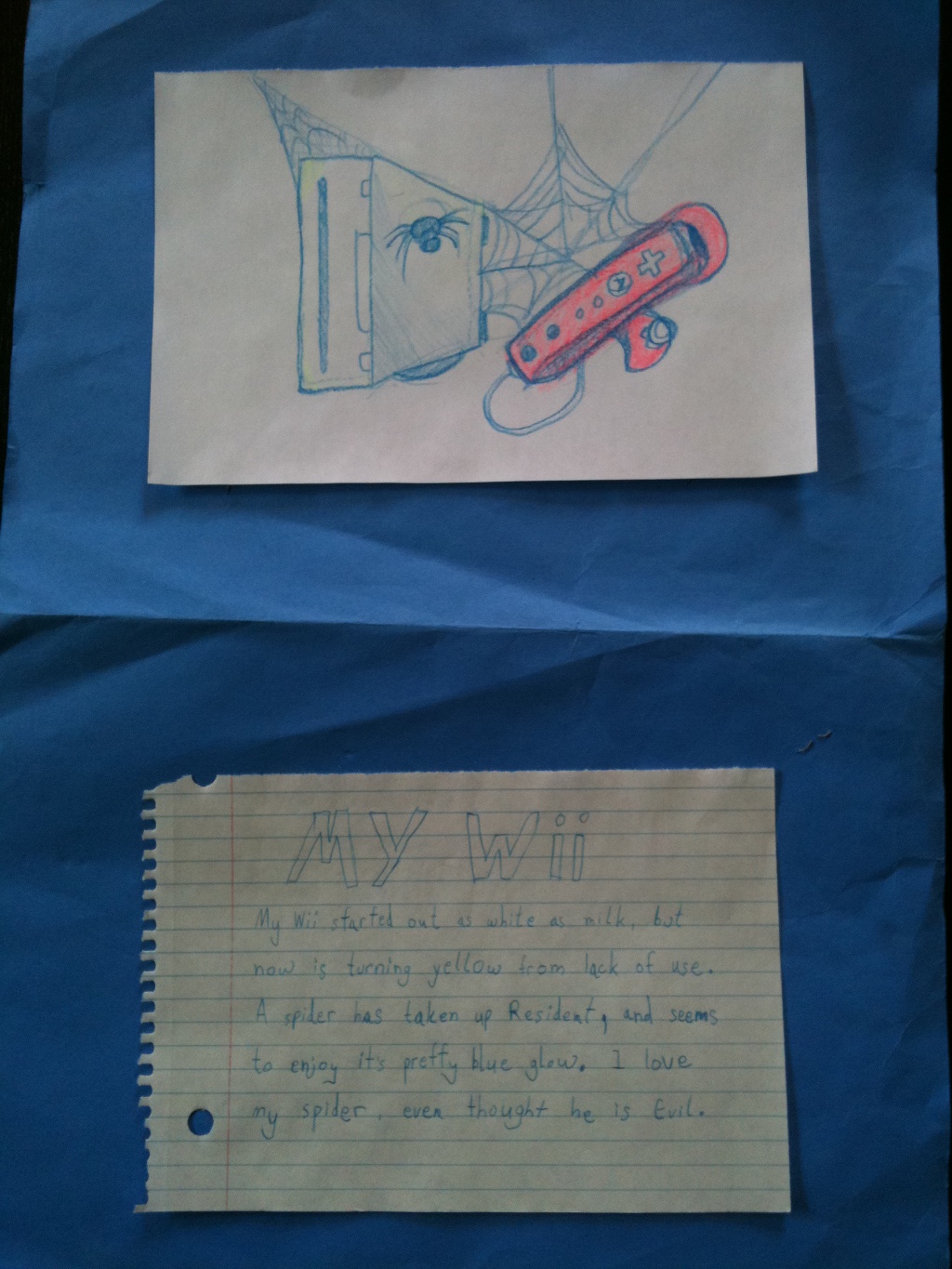 My Wii
My Wii started out as white as milk, but now is turning yellow from lack of use. A spider has taken up Resident, and seems to enjoy it’s pretty blue glow. I love my spider, even thought he is Evil.

Finally, we come to the most annoying of entries, The Comedian. Rather than stick straight to the assignment, this class clown has seen fit to go for laughs instead of approaching the subject seriously. Sure, it will win him a few guffaws from the peanut gallery, but he won’t ever become the Lester Bangs of video game journalism with this kind of attitude. If this were my kid, you can rest assured that I would punish him within an inch of his life. Let’s see how easy it would be to maintain that Ferris Beuller attitude after a day of no personal credit card! Well, at least he didn’t make a top 10 list.